Prometeia Atlante
Insight for your business

The demographic decline continues in Italy

Istat certifies that the population in Italy continued to decline through last year. Discover the territorial demographic analysis on Prometeia MIO

2018 ended with a decrease in the resident population of -1.5 per thousand inhabitants [1]. Only 5 regions, all in northern Italy, showed a demographic recovery led by Bolzano (6.4 per thousand inhabitants), followed by Emilia Romagna and Lombardy (2.4 and 2.1 respectively), and finally, Veneto and Trento with less than 2 per thousand residents (see Fig. 1). The decline in Molise and Basilicata, as well as in Sardinia and Sicily, is particularly worrying. However, the situation in Liguria and Piedmont, the two northern regions where the population decline is strongest, is also preoccupying. 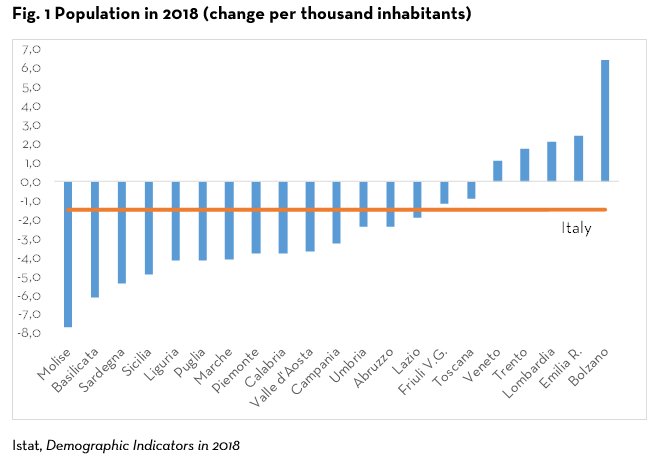 The seriousness of the situation was also highlighted by the Corte dei Conti in its 2018 Report on the coordination of public finances: "In the coming years, the public budget will be strongly affected by the aging of the population and changes in the demographic structure.”

Causes are easy to investigate. The natural population growth (difference between the birth rate and the mortality rate) was positive only in Bolzano (1.8 per thousand inhabitants), while in several regions, the numbers are strongly negative (-8.5 per thousand inhabitants in Liguria, -5.7 in Piedmont, -3.9 in Emilia Romagna, etc.) (see Fig. 2). The structure of the population, strongly unbalanced towards the higher age groups, justifies on the one hand the low birth rate of Liguria (among the lowest in Italy alongside Sardinia) and on the other hand the high mortality rate, well above the Italian average. 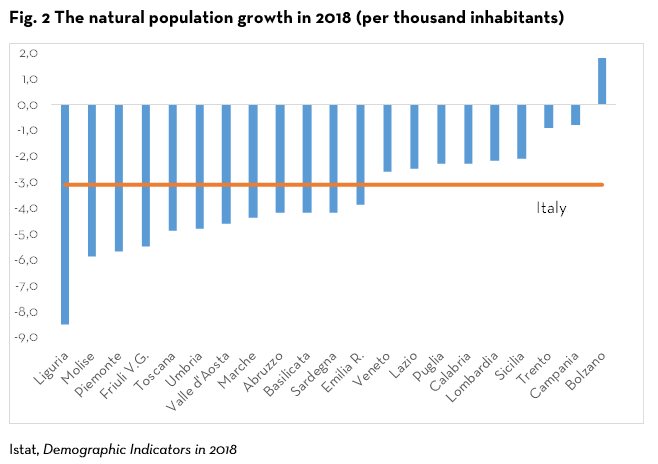 On the other hand, the migration balance (domestic and foreign), continuously growing since 2016 (1.6 per thousand inhabitants), is only partially offsetting this low birth rate. Here again, the Italian situation is completely heterogeneous: Emilia Romagna, the most attractive region in terms of migratory flows, stands out along with Bolzano, Liguria, Friuli Venezia Giulia, and Lombardy for the highest total migratory balance in Italy, thanks to one of the highest foreign balances (see Fig. 3). 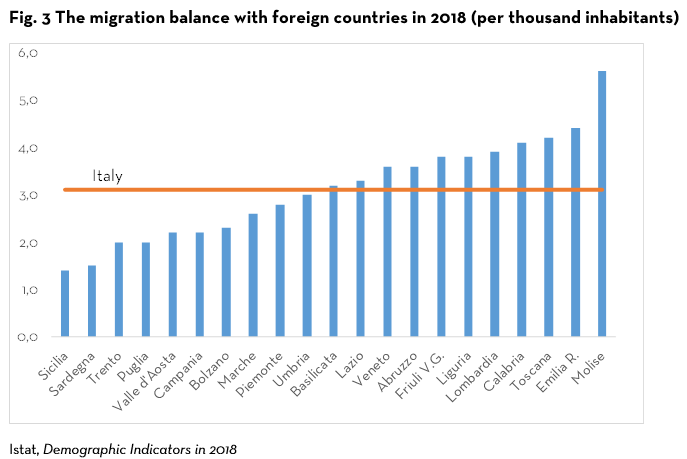 
Go to our reports